What Do You Call a Record Player Needle?

You can keep calling the needle on your record player a needle if you like, after all, that’s what it is, but if you want to show off your technical chops, call it a stylus. But then the question becomes...why?

Well, the etymology of the word stylus is rather fascinating. It comes from the Latin, “stilus”, a word given to a stake or pick, which itself was derived from the Indo-European root, “stei”, meaning “to prick” (much like a needle).

Needle has the same Latin and Indo-European origins as stylus. The original world was “nere”, which meant “to spin” (much like a record).

So, as you can see, both words have a strong claim to the functionality of a record player from an etymological standpoint. Neither is particularly wrong nor right, as by and large, they mean exactly the same thing.

Needle is considered to be more generic terminology, while stylus has much more of a formal feel, insinuating a more in-depth knowledge of both record players and the vinyl records themselves.

Which do you prefer? I prefer stylus, but you don’t have to pick a side. Using both synonyms will help you talk about record players in different ways for different audiences. Moreover, switching your chosen word up every now and again will help to keep your vocabulary from becoming stilted.

Are all record player needles the same?

You’d be forgiven for thinking a record player needle is a needle and that’s that, but there are actually four main types of stylus defined by their shape — shocking, I know.

The most common types of needle or stylus (whichever you prefer) are spherical (also known as conical). If you’ve got a budget record player, the chances are it’s locked and loaded with one of these needles as they’re the most affordable type on the market.

Defined by their rounded head and comparatively wide radius, spherical styli often aren’t articulate enough to pick up on the minor groove details on your records. This means that they omit a small fraction of the higher frequency information, which can be a blessing in disguise if you’re spinning some older, worse for wear records. The blunt end will reduce a lot of pops, hissing, and clicks.

You may have already come across the debates on how safe they are to use on our prized record collections. Some believe that they’re the worst as the diamond only makes two points of connection, while others claim that’s the very reason they’re not harmful. I recommend giving this Audio-Technica ATN91 Replacement Conical Turntable Stylus for AT91 a go. 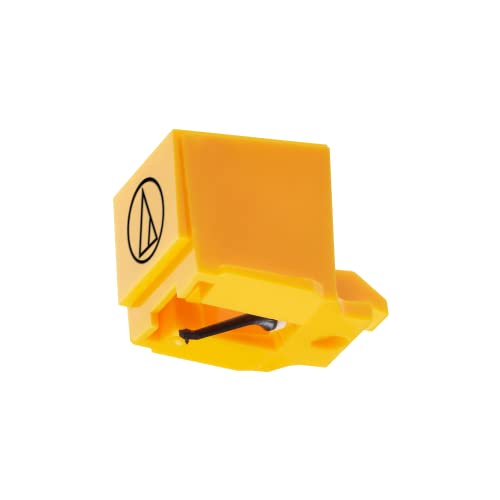 Elliptical or bi-radial styli aren’t quite sharp, but they’re far more pointy than their conical counterparts, and they’re the second most common needle type. Using dual radii, they make a hefty amount of contact with groove walls, which leads to a wider frequency response (especially at the treble end of the spectrum), enhanced tracking, lower distortion, and better phase response.

As great as they sound, it’s common knowledge that they wear faster than spherical styli, and you’ll need to fine-tune tonearm and cartridge alignment to hear them at their full potential. For more info, I’d recommend checking out this Audio-Technica AT-VMN95E Elliptical Replacement Turntable Stylus. 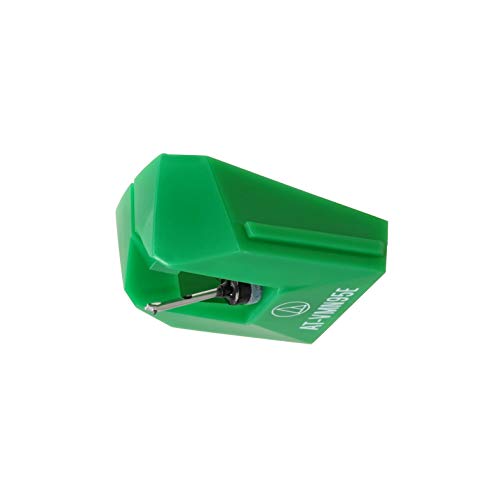 Hyperelliptical styli are a sharper variant of the elliptical design, and they sound amazing! Also referred to as shibata, fine line, or stereohedron needles, they make optimum contact with the grooves in a record, leading to soaring highs, longer service life, reduced record wear, and even better tracking.

They’re a little pricey, but if you’re an audiophile, they’re worth every single penny. This Audio-Technica AT-VMN95SH Shibata Replacement Turntable Stylus Brown is a great place to start your hyperelliptical search. 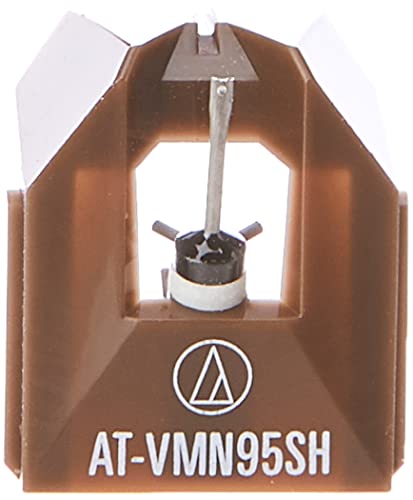 If you’re after the best of the best, micro-ridge styli are it. Featuring a tiered point, they have the best high-frequency response of all the needles, they’re easy on vinyl, and they last for ages.

Unfortunately, though, they’re incredibly difficult to make and expensive to buy.

It’s not just the shaping of a needle that sets it apart, but the material of the tip. Ideally, all styli tips would be made of diamond, but there are some out there made of steel and sapphire.

Steel and sapphire wear faster and don’t sound quite as nice.

Can I put any cartridge on my turntable?

It would save us vinyl enthusiasts a lot of hassle if turntable cartridges were universal, but unfortunately, that’s not the case.

There are currently two types of cartridge available, each with unique electrical architecture. Some hybrid turntables are designed to accommodate both, but they’ll cost you.

Moving magnet cartridges use a cantilever to transfer mechanical vibrations from the styli on the vinyl directly to dual magnets. In response, their constantly shifting magnetic field generates a proportional electromotive force.

These are the more affordable option, which isn’t to say that they sound bad, just not quite as nice as MC cartridges, which we’ll talk about next. If you’re interested in buying one, I highly recommend this Audio-Technica AT-VM95C Dual Moving Magnet Turntable Cartridge Blue. 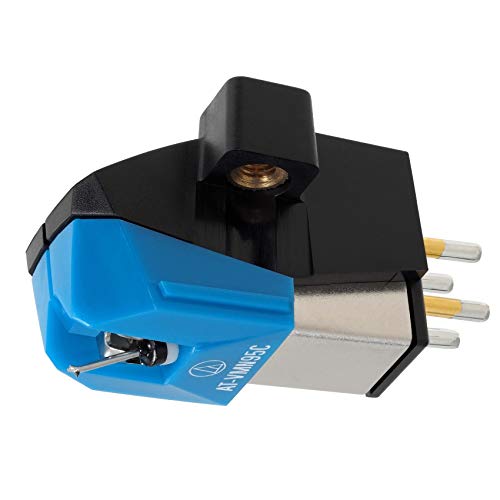 A rotating coil moves around the magnetic field of a fixed magnet with this cartridge type, causing a low inertia electromotive force that translates to a hi-fidelity sound. They provide audiophile-level playback, but they cost a pretty penny. You can see for yourself here: Denon DL-103 Moving Coil Cartridge: Home Audio & Theater. 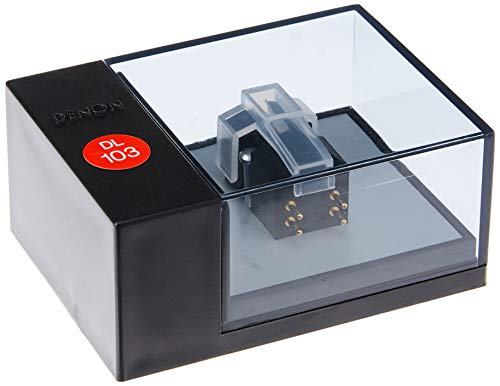 Do record player cartridges wear out?

The quality of record player cartridges varies from product to product and brand to brand, but they all share one thing in common — they will eventually wear out.

Your cartridge probably won’t just break all of a sudden leaving you dancing around your living room in silence. It’s more likely to exhibit a slow degradation in audio fidelity over time.

It’s recommended that you switch out your cartridge after roughly 1000 hours of good times listening to your favorite records, a schedule that can be difficult to keep to, as no one really marks their life out in days to such an extent.

My suggestion is to treat yourself to a new cartridge after every two years or so, but only if you’re spinning records one to two hours a day. If records are more of a weekend pursuit for you, you probably won’t need to change it so often.

You should also consider the area you live in when it comes to cartridge replacement. Cartridges with rubber components are known to degrade faster in heavy air-pollution areas.

How do I replace the needle on my record player?

Replacing the needle on a record player can be a daunting experience if it’s your first time, but there’s no need to worry; it’s a fairly simple operation.

What is the difference between a turntable cartridge and stylus?

The stylus and cartridge on your record player are best friends, and if either of them broke, you can kiss those sweet sounds goodbye, but it’s important to note that they are distinct components.

As we’ve already touched upon, the stylus is the needle that actually makes contact with your records. It runs along the grooves, picking up vibrations. Then it’s the cartridge’s time to shine.

Your cartridge accepts the vibrations from the stylus and, using magnets, translates the mechanical force into electrical signals. From there, the signal is able to travel through cables to an amplifier and speakers. The speakers can then translate the electrical signals into sound waves, which, in turn, make you get up on your feet and dance.

So, you see, the stylus and the cartridge have two very different, equally integral roles to play in sound production. The stylus is a conduit of kinetic energy, while the cartridge is an electrical component.

How Can You Tell a Quality Speaker?