Though it’s been in production since 2014, the BOSE Cinemate 15 holds up as one of the most successful soundbars of its kind; powerful, compact and with crisp, clear sound, it’s one of my standout favorites, even today.

With an accompanying, easily hidable subwoofer, the bass tones that are lost to the built-in speakers of your TV will be brought to life, and that’s only the beginning - it still holds up in quality. Keep reading to discover exactly what I love about it, reasons you may not be its biggest fan, and what to expect from the installation and maintenance side of things - I’m pretty sure you’ll add one to that virtual cart in no time. 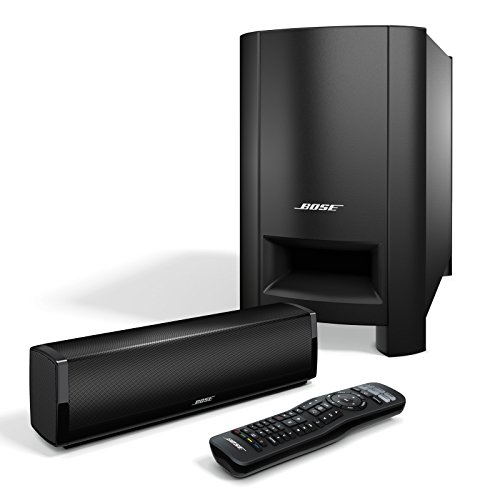 Feel free to skip this part if it means nothing to you, as I’ll be laying out the Cinemate’s 15 positive points and potential lows without using difficult to understand jargon, but for the especially tech-savvy, here are some specs…

First things first: this soundbar is designed for tabletop placements - it’s not possible to wall-mount, nor can you purchase any brackets that will be appropriate - Bose actively recommends against doing so.

Placement-wise, they advise you position the soundbar in front of your TV as opposed to beneath or in a cabinet, with the Acoustimass module placed within three meters, standing on its feet, ensuring there’s an AC power outlet close enough.

Installing the CineMate 15 is simple enough, easily connected to your TV through an RCA analog, optical or coaxial input - you’ll find that optical offers the best performance overall if that’s an option for you.

Bring your favorite shows, video games, and movies to life with just one simple, addition to your setup - once you have one, you won’t believe you ever used to watch TV without it!

Once it’s plugged into your tv, you’ve connected the subwoofer (using the included cable) and the power cord has also been attached and plugged into an outlet, you’re pretty much good to go. Set up takes minutes, which is a big plus on my end.

You’ll find that the step-by-step guide for setup included in the user’s manual is clear, concise and simple to follow, with diagrams and simple instructions even your kids could follow, though let’s face it, they probably know more than you.

As I have come to expect from Bose, the aesthetics of this soundbar are beautiful, with the bar itself, the Acoustimass subwoofer and the remote in a glossy, matte black design that suits any setup style.

A thin metal grille disguises those internal parts, whilst a gloss finish wraps everything up in a stylish, shiny package that looks just as modern as the sounds it produces.

As it’s been on the market for a while, you might expect it to look old or outdated beside your other gadgets and gizmos, but it fits in just fine, and it’s going to be a lot cheaper than any of your newer buys, too!

Practically miniature in comparison to some of the sound-system behemoths on the market these days, you might not expect this petite bar to pack much of a punch, but you’d be surprised at how powerful a sound it produces.

Compared to the speakers built into your TV, it’s a major upgrade: given it’s such a small bar, the compact size is a huge bonus, and it won’t block the screen whilst it fills the whole room with atmospheric sound.

Thanks to a four-element speaker array that works alongside Bose TrueSpace signal processing, any sound will be boosted far beyond its speaker itself, as though you’re fully immersed, to recreate that movie theater experience.

Mids and trebles are as good as can be expected, and for those deep, rich bass tones, look no further than the Acoustimass module, which is essentially a glorified subwoofer utilizing patented Bose technology to really hit those low notes.

Not only will you hear unrivaled sounds, but FEEL them too, as the CineMate blasts you with vibrations from the pulsating rhythms of an instrument to the ricocheting bullets of a machine gun, none of which your TV can reproduce on its own.

Unfortunately, though, the Acoustimass module is pretty sizeable, nowhere near as sleek and stylish as the bar itself, so it might ruin the minimalist vibes of your setup a bit if you haven’t got the room on your TV console or shelf to tuck it away.

Thanks to the universal remote that’s included with your soundbar, not only can you control the volume, but it’ll work on your cable box, DVD player and more, too!

Never again will your coffee table be cluttered up with remotes that you have no idea how to use or what they are for - all you need is this one magic button presser and the power to control the (cinematic) universe is yours, all yours!

Unfortunately, this is the only way to control your soundbar, so if you lose it, you’ve lost your ability to turn it on, but you don’t have to replace it with an official Bose model, so that’ll save you a few dollars.

Thanks to an eco-conscious design, the system will power off automatically after one hour of inactivity, which not only reduces the likelihood of you needing to replace it, but saves on your electricity bill too!

However, if you’re not a fan of being told what to do, you can very simply disable and re-enable the auto-sleep feature just by holding the power button down for up to ten seconds, though I’d recommend leaving it on, to be honest.

Can you add speakers to the CineMate 15?

Unfortunately not: as this product is designed to emulate a complete home theater experience, it’s a closed-package system with no potential to add more speakers for surround sound if you desire. But you shouldn’t need them!

Does the CineMate 15 offer Bluetooth connection?

Whilst Bluetooth capabilities are not built into the CineMate itself, it *is* possible to buy an adaptor separately (including one produced by Bose themselves) which will allow you to connect listening devices to your soundbar wirelessly with ease.

How do I connect my Bose CineMate 15 to my TV?

As I’ve explained above, the CineMate connects to one of your TV’s audio outputs, whether that’s Optical, Coaxial or RCA, using one of the wires supplied in box. Optical offers the best results, but if your TV isn’t compatible, don’t worry.

In order to hook everything (your video game systems, DVD player, other electronics) up to your soundbar, it’s best to connect them straight up to your TV first, and then they’ll be forced to play audio through the bar as standard.

How can you improve the bass of the Acoustimass subwoofer?

Whilst a few customers report that the bass notes can be a little weak, a more accurate placement can really boost things: if you place it sideways, up against the wall (so that the vent faces another wall) you can increase the fullness of your bass.

Can you use the Bose CineMate without a remote?

Though it doesn’t have to be the remote supplied originally by Bose, it is required to use a remote for controlling the system, and this is actually the only way to power it on - if you’ve lost yours, you’re going to need a replacement.

Can you adjust the bass of the Acoustimass module?

Yes! There is a small knob on the reverse of the subwoofer, which allows you to modify the bass level output - simply turn this to the right to increase the bass, or to the left if you’d rather reduce it a little.